The WPTLA is actively involved in community service based projects around the Pittsburgh community.

The Steelwheelers organization began in the mid 1970’s when four men decided to turn a dream into a reality. The interest of forming a wheelchair basketball team in the Pittsburgh area was an idea shared concurrently amongst several individuals.

In 1977 the group was officially registered as the Pittsburgh Steelwheelers, Inc., whereby it became a non-profit organization that provided wheelchair sports in the Pittsburgh and Western PA areas. The teams are comprised of male and female athletes in age from 8 to 71. The organization maintains of a variety of sports programs, including basketball, track/road racing, and rugby.  The newest sport is hand cycling. The goal has always been to help members develop a sense of well-being that comes from being physically active and involved in the community.  Watch a short video about the Steelwheelers.  We thank Post Script Productions for the video.

Online 50/50 to support the Steelwheelers has concluded.  Congratulations to WPTLA Business Partner Dave Kassekert, of Keystone Engineering Consultants, on winning $482.50.  The other half of the winnings will go to the Steelwheelers.

Email a photo of you racing in a past 5K shirt and we’ll post it to our social media pages! 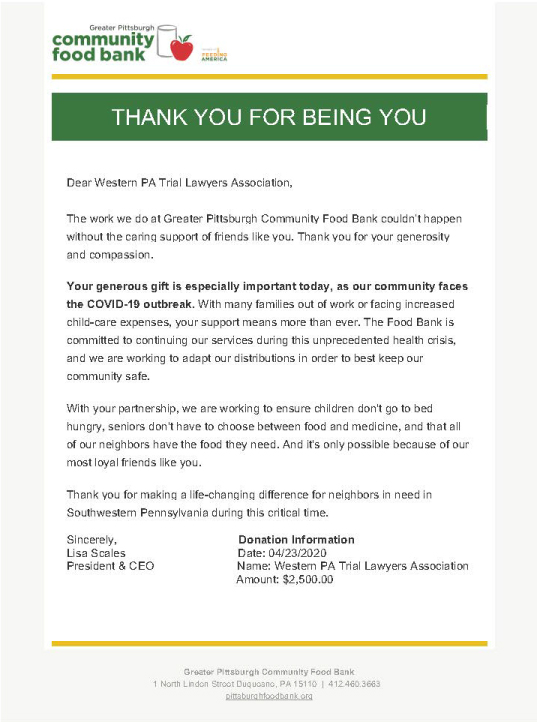 This was a return to the scene of a previous Habitat work day on April, 2015, when another group hung dry wall, laid sub flooring in the bathroom, and removed old and installed new windows.  That group included those pictured below.

The Beaver County Habitat for Humanity ReStore was the scene of our recent Community Service project on Saturday, November 9, 2013. Read a shout out from Habitat on Facebook. Many thanks to participants Justin Joseph, Larry Kelly, James Tallman, Abigail Tocci, Bill Tocci, Laura Tocci, and Greg Unatin. 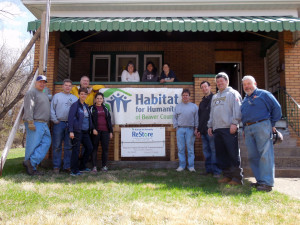 On Saturday, May 11, 2013, WPTLA Members Chad Bowers, James Tallman, Greg Unatin, and Sydne Unatin, Laurie Lacher, Luke Lacher, and Nick Hutchison took WPTLA to the streets of Pittsburgh for a few hours of rugged volunteer work. The crew joined with several other young volunteers to keep Pittsburgh looking beautiful. The task: clean beneath, between, and behind city trash cans and newspaper boxes. First, we donned free yellow T-Shirts and followed our leader, Barrie, of the Pittsburgh Downtown Partnership, to an alley where out of the public’s eye we gathered rags,brooms, and other tools to complete the transformation into super cleaners.

After mission briefing, we moved up and down the cross roads bet ween Penn Avenue and Ft. Duquesne Boulevard. The yellow-shirted volunteers swarmed every trash bin and set of newspaper boxes in sight. Some of us relocated rotten apple cores to their proper home, while others dislodged gum stuck to trash bins since the days of the original double-mint twins. Chad Bowers held the great power of an Xacto knife with the great responsibility of removing stickers from lampposts and street signs. Like all winning teams, everybody contributed to the task at hand.

Our group was so efficient, we stopped for a coffee break at Starbucks. But as Barrie made clear, it didn’t matter what we did or when we decided to call it quits. Pittsburgh Downtown Partnership was genuinely grateful to each of us for simply showing up. Of course, we moved our way back up Liberty Avenue to finish what we started. At the end of the day, the city sparkled with a series of trash containers not even a litter bug could resist.

Distracted driving is an ever increasing problem in our society.  People are more and more attached to their telephones and distracted driving is no longer limited to dialing or talking on the telephone while driving.  Instead, many people are now checking email, sending texts, reading text messages, etc. all while driving a vehicle.  Research has proven the increased dangers associated with driving while distracted, even if just for a few seconds.

PA attorney Joel Feldman created a program aimed at educating people about the risks of distracted driving.  His program, entitled End Distracted Driving (EndDD), has reached more than 300,000 students and drivers in 45 states.  WPTLA has joined the ranks of those presenting the EndDd program by doing so in high schools through western Pennsylvania.

WPTLA, in collaboration with the Pittsburgh Pro Bono Partnership, has begun a signature pro-bono project to benefit the less fortunate citizens of Allegheny County.  The project is called “The Wills Project” and provides legal assistance to low income families in preparing essential personal documents – simple wills, Advanced Directives, and durable powers of attorney. The clinics will be held at Operation Better Block’s office in Homewood.

This program works with a client of a member attorney that has been through a disaster and has demonstrated the ‘spirit of getting past and coming back’. At the award dinner, a charity of the clients choosing is presented with a $2,500 donation.

Every year, WPTLA invites all public and private high schools within the Western District of Pennsylvania to participate in our Scholarship Essay Contest. Timely topics are chosen annually by a committee and shared with schools choosing to take part. Submissions are reviewed blindly by the committee, and the three top essayists are awarded $2,000.00 scholarships each, along with an invitation to our Annual Judiciary Dinner for presentation and recognition.

The 2020 topic focused on an actual 2015 case in Montana relating to tax credit scholarship programs and the Religion and Equal Protection clauses of the United States Constitution. The three winning essayists were: